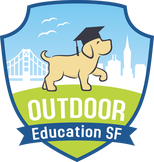 From birds of prey to dogs at play.

Ever since I was a little girl, I went to every dog owner I saw, and I asked very politely, “Excuse me, may I pet your dog?” If the answer was yes, I would offer my hand for a quick sniff before gently petting the pup and soaking up as much dog love as I could. For every single birthday, special event, or after passing any dog, I would always ask my mom for my own puppy. The answer was always either “No,” or “Yes! When you are old enough and able to take care of it by yourself in your own apartment.” Then my list would begin. If I couldn’t have a dog, maybe a Kitty? Hamster? Piggy? Bunny? Llama? I was very creative with the different animals I asked for and I longed for any kind of animal connection without discrimination.

My wise mother knew that if she wanted to keep her house an animal free zone (Which it wasn’t totally; I was allowed 2 mice and a hamster, and my brother had a corn snake), she needed to find me another outlet for my insatiable desire to be around animals. At 12 years old, I was volunteering at the San Francisco Zoo, the SPCA, and pet sitting for friends. Through my volunteer experience, I developed a hard work ethic and foundation for animal handling and husbandry. Taking care of animals is no small job! Every animal I worked with had new techniques for handling, husbandry and facts about their lifestyle. I was thrilled to soak up as much information as I could.

In High School, I started imagining my role as an animal professional. Much like Goldilocks, I tried out many animal care roles and it took a while to find the one that fit. I volunteered at a Vet Clinic, quickly learning that the medical side of animal care was not for me. Instead of veterinary school, I went to UCSD to study Ecology, Behavior, and Evolution with a minor in Psychology. For many years, I was sure I wanted to be a zookeeper.  I took on every internship or job that would keep me around animals. I worked with the Suisun Wildlife Center, the Carnivore Department at the Houston Zoo, and the Living Coast Discovery Center. In 2014, I returned to the San Francisco Zoo.

I had pushed myself for so long to become a zookeeper but once I was actually doing it full-time, I realized, like Goldilocks, that something was not quite right. As a keeper, there is a repetitive daily routine and a lot of manual work. People often think zookeepers spend the whole day playing with animals though that is far from the truth. I was having trouble staying motivated.  I reached out to a fellow zookeeper and I asked him, “How do you stay engaged when everything is so similar from day to day?” He told me, “For me, it’s not hard because the moment I walk into the barn, I see the Giraffes, and I know there is nowhere else I could be.” Hearing him say that, I understood that I did not feel the same way.  So, I decided to stop romanticizing my role as a zookeeper who cares for exotic animals and instead, start working with my favorite animal of all time. The way he felt about giraffes is the way I feel about dogs.

I began working with puppies at SF Puppy Prep. The principles of training are much the same between a hawk and a dog.  The biggest difference is that compared to exotic animals, dogs are so willing to learn. Their genetics predispose them to working with humans. After a year and a half, I decided to join the Outdoor Education program as a way to expand and use more of my training knowledge in a true-to-life environment. I could not be more pleased to work alongside this team of very skilled trainers in order to help guide dogs and their people towards happier, healthier relationships.